10 Most Underrated Anime You Must Watch! 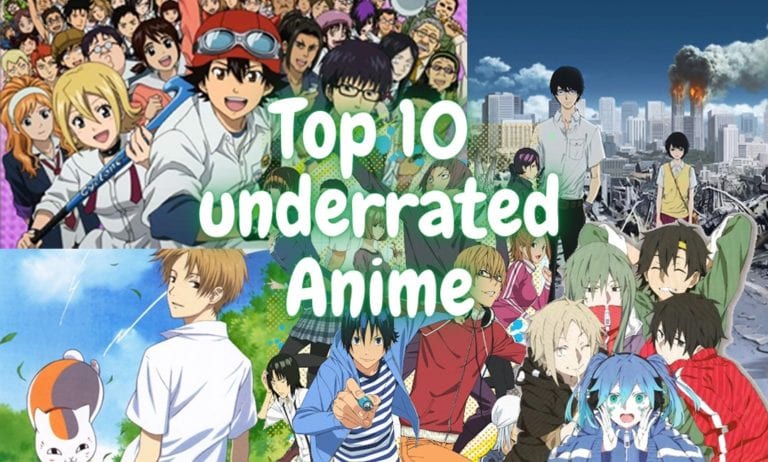 Some anime gather a lot of hype very quickly while others never get a chance to the VIP seats ever. The rise of the classics like Naruto, One piece, Bleach, etc are masterpieces on their own which overshadowed a lot of anime that have their own charm.

So do you appreciate strange psychological traumas, unique anime styles, a good heartfelt story, Japanese aesthetics or some mind-blowing artworks?

If so, here are your delightful treats!

Paranoia agent is one of  the original master works of Satoshi Kon in the animation industry. Its quite underrated as many of the anime lovers don’t understand the beauty of a satire, the psychological war that goes on in your head and keep asking “why?”

If you love movies of Madhouse Studio, you are also gonna love the visuals of this psychological thriller. This short series focuses on a social phenomenon in Musashino,Tokyo cased by a juvenile serial assailant named Li’l Slugger. It relays between a large cast of people affected in some way by the phenomenon, usually Li’l Slugger’s victims or the detectives assigned to apprehend him.

Creators Tsugumi Ohba and Takeshi Obata, the same team responsible for Death Note gave birth to this gem in a treasure trove which shows the hardships of a mangaka – how it all begins and the sea of struggles that comes with it.

Bakuman reveals the story of a Moritaka Mashiro, a junior high student, who forgets his notebook in class, he finds his classmate, Akito Takagi, who notes Mashiro’s drawings. From there they start their dream journey to be serialized in the Weekly shounen Jump. If you are really interested if they succeed or not, then go check it out!

Mekakucity actors is the animated series made by SHAFT studio based on the mixed media project called the “Kagerou Project”(originally a Vocaloid song project).

It is story about a Mekakushi Dan, a group of young adults with unusual eye-related powers. Every episode in the first half has a post script scene which helps you ease in the real mystery. The animation style is quiet unique and intriguing.

Kazuto Nakazawa’s Zankyou no Teroru, will steal your heart with the level of action, mystery and drama that it creates complemented by beautiful music pieces by Yoko Kanno is a great example of unheard beauty.

The story is about two teenagers with Savant syndromes converted into human weapons by an oragnization Rising Peace Academy, dead set to destroy Tokyo until a cryptic riddle is not solved. Lisa a lonely schoolgirl also gets sucked into their plans to expose the horrible activities of the organization .

Do you ever curse your fate just because you took the wrong choice? Well, I’m sure we all have here and there. But the fate of these kids in Bokura no is more painful than you will ever come across.

The science fiction anime created by Mohiro Kitoh takes a bunch of harmless kids trying to get along during their summer vacation, suddenly gets transported to a mecha parallel world to save Earth by killing other mechas at the cost of their lives. How sad that can be right? Well, it will ruin you.

Now, lets come to some japanese aesthetics. Shall we?

Food in anime is as aesthetically presented as it goes. One of the unappreciated food animes I always wanted to mention was Sweetness and Lightning by Gido Amagakure.

The story is simple but it will really touch your heart when Tsumugi will start missing her mother’s cooking. The struggle of a school teacher and her daughter to find the amazing world of homemade Japanese cooking, along with a highschool student is a good way to ease into cooking anime if you are interested.

Welcome to the world of Yokai! Natsume yuujinchou or Natsume’s book of friends by Yuki Midorikawa is a breath of fresh air if you really love slice of life animes involving Japanese religious cultures.

The series involves a gifted boy Takashi natsume who inherited the ability from his grandmother to see yokais or spirits. The story follows how he came in terms with his loneliness with the invisible beings as his source of happiness.

The mystery novel turned anime by Honobu Yonezawa is a great example of curious story telling. Every episode is a bliss to watch even if you are not crazy about anime.

Kamiyama High School’s Classic Literature Club set in an imaginary city of Kamiyama in Gifu prefecture was saved from abolishment by Oreki Hotarou and his fellow members. They encounter several mysteries around the school and try to solve them flawlessly.

The best Shonen manga of 2009 by Kenta Shinohara lost its tempo in recent times yet this anime has presented a perfect protagonist group, Sket dan we all look forward to.

The anime focuses on the dedication of this eccentric club members to solve any and all problems submitted by the staff or student body to improve the the general improvement of campus life of Kaimei High School.

Finishing of with something dense and praiseworthy artwork suggestive anime.

If you love pure eccentric horror, if you love artworks, if you love just being tortured in your sleep- watch Itou Junji: collection. Period.

Better if you can get hold of the manga. It will blow your mind. Itou sensei is a legend.