Is Yuji Itadori Dead? How Did He Survive In Jujutsu Kaisen?

It was with a sense of foreboding that most viewers saw Jujutsu Kaisen Episode 5. And there’s a valid reason behind it. Unlike before, Itadori was not able to switch at will with Ryomen Sukuna. This could only mean something bad for Itadori. And something really bad did happen. After Sukuna defeated the special grade … 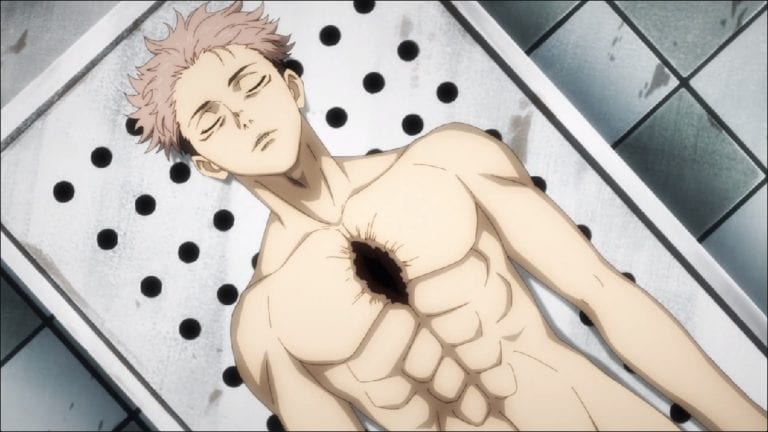 It was with a sense of foreboding that most viewers saw Jujutsu Kaisen Episode 5. And there’s a valid reason behind it.

Unlike before, Itadori was not able to switch at will with Ryomen Sukuna. This could only mean something bad for Itadori.

And something really bad did happen.

After Sukuna defeated the special grade cursed spirit at the Juvenile detention facility, he called out Itadori to switch with him.

However, due to some reason, Itadori was unable to switch. Sukuna saw this as the right opportunity to take control of his body and ripped out Yuji’s heart.

Now, this was a brilliant move on Sukuna’s side.

Being a cursed spirit, Sukuna had no need for a heart to survive. And in the future, even if he did need one, he could easily use the Reversed Cursed Technique to generate one again (just like he healed Itadori’s arms).

And if Itadori were to switch back in this scenario, it was guaranteed that he would die.

Sukuna thought that this would force Itadori to reconsider taking control of his body again.

But Itadori being headstrong (and a shounen protag) there was no way he wouldn’t switch back. And switch back he did, sacrificing his life so that Sukuna won’t reign supreme.

Was this supposed to be an Attack on Titan like twist with the major characters dying without any notice? Well, no.

At the end of the episode, doubts were raised as to whether Itadori is really dead. We also catch a glimpse of Sukuna talking to (looking down on) someone.

For now, we can safely assume that this person is none other than Itadori (or is it?) So what happened to Itadori? Where is he currently? Is he alive and if yes how?

To answer the question in short, Yuji Itadori is alive, though his body is missing a heart. He is currently with Sukuna inside the latter’s innate domain.

The following part contains spoilers for Jujutsu Kaisen. Read ahead at your own discretion!

Contents hide
So, how did Yuji Itadori survive?
Why did Sukuna save Itadori?

So, how did Yuji Itadori survive?

When Yuji was about to die, Sukuna transferred his soul (along with his consciousness) into his innate domain.

This let him survive, even though his physical body was dead.

If you are wondering why he did that, then the answer is simple. Yuji is Sukuna’s vessel. If Yuji dies, so does Sukuna.

By transferring Yuji’s soul into his innate domain, Sukuna made sure that Yuji would survive, even though his physical body is now dead.

Itadori is then revived by Sukuna after the former is forced to form a pact or a contract with him.

Itadowi, however, has no memory of this happening to him.

The reason why we said Sukuna’s plan was brilliant is because Itadori is now totally at Sukuna’s mercy.

Itadori is precisely where Sukuna wants him to be and now he can impose some conditions if the former wishes to survive.

This brings us to the next part.

Why did Sukuna save Itadori?

Sukuna saves Itadori because, in return he wishes to form a binding vow with him. Also, like we mentioned before, Itadori is Sukuna’s vessel.

If he dies, there’s no way he can find a suitable vessel like Yuji again (one in a million chance, like Megumi mentioned in the first episode).

Currently, Yuji is using Sukuna as per his own wishes. He switches with Sukuna whenever he wants. He even makes the cursed spirit do his bidding and help him out, as we saw in the Juvenile detention center.

It goes without saying that Sukuna hates this. He has his own ulterior motives.

By forming a binding vow, Sukuna can make sure that at least for some part, he will be the one to command how things proceed.

However, there is no way Itadori would agree to Sukuna’s conditions easily. He’d rather die than give in to an evil spirit like Sukuna.

So the latter has to come up with some kind of a bet, or wily condition which would make Itadori believe that he still has some kind of a chance. Being able to survive is just the cherry on top.

Can Sukuna make a binding vow with Itadori? If he does what will he ask from the latter. And if Itadori does survive, what price will he have to pay?