What Did Eren See When He Kissed Historia’s Hand? 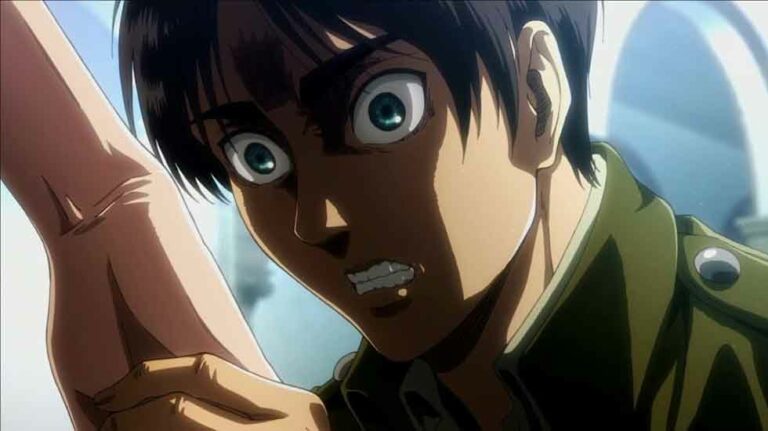 Titan inheritors usually gain the memories of the previous shifter, but these memories appear in bits and pieces. This supposedly happens when certain criteria are met, and mostly requires a trigger.

In Eren’s case, as he has the Founding Titan, he is able to access memories of his past when he is in contact with the royal bloodline.

This has happened twice in the series.

The first instance takes place when Rod and Historia Reiss touch him in the cavern underneath the Reiss chapel and the second time was when he kissed Historia’s hand during her coronation.

The memories that Eren saw the second time were not revealed at that time to the readers/viewers, but his expression later speaks volumes about the importance of that vision.

From what little that was revealed in the anime  (Attack on Titan Season 3, Episode 22, Manga Chapter 90), Eren saw Grisha’s memories from when he murdered the Reiss family at the chapel.

Was it his father’s cruelty that made Eren look so shocked? It seems not.

Contents hide
So what exactly was it that Eren saw when he kissed Historia’s hand?
Why was Eren shocked and angry when he touched Historia?

So what exactly was it that Eren saw when he kissed Historia’s hand?

The following part of the post contains major spoilers for the Attack on Titan manga chapters. Read further at your own discretion.

We get a clear picture of what Eren saw when he kissed Historia’s hand in Chapter 121 of Attack on Titan. But in order to understand it completely, we need to know three things.

In the chapter, Grisha Reveals to Frieda Reiss that the Attack Titan is capable of seeing the future or seeing the memories of its future inheritors.

To be more precise, this means that just like the other Titan shifters gain the memories of their past users randomly.

Or, when certain criteria are fulfilled, the Attack Titan is able to receive memories of both its past and future inheritors (in bits and pieces of course).

But it is not confirmed if the future can be altered based on these memories. Meaning the Attack on Titan timeline could very well be a closed time loop.

So, when Grisha was fighting Frieda Reiss’s Founding Titan, he receives or is able to see a memory that belonged to future Eren.

This scenery or memory which Grisha saw has not yet taken place in the timeline of Attack on Titan ( however it is assumed that this could be a scene from the rumbling) and it is not possible to know what it was.

According to Grisha, this was a very disturbing “scenery” or a memory.

Grisha kills the Reiss family and obtains the Founding Titan in the year 845. While this incident was underway, he sees the memories from a future Eren.

Historia Reiss is crowned in the year 850.

In chapter 121, Zeke and Eren are going through Grisha Yeager’s memories, using the power of the Founding Titan.

It is then that they come across Grisha’s memory of murdering the Reiss family.

But then one of the biggest twists of the series takes place and we realize that Grisha only kills Frieda Reiss and the other members of the family because he was forced by Eren to do so.

Now, to answer the question,

When Eren kissed Historia’s hand during her coronation (year 850), he saw the memories of Grisha Yeager killing the Reiss family (year 845), along with the future memory of Eren that Grisha had seen while fighting Frieda Reiss.

So in short Eren saw what happens in the future through the eyes of Grisha Yeager at that moment.

But this is not the reason for Eren looking shocked and angry.

Why was Eren shocked and angry when he touched Historia?

On seeing the future memories, Eren comes to know that Grisha Yeager had actually decided against killing the Reiss family. He only changes his decision after he sees the memories of a future Eren.

This has led to many speculations about Eren being able to influence or change the past and the existence of a time-loop in Attack on Titan.

However, what makes Eren really angry is Grisha’s request to Zeke to stop Eren. Grisha realises that Eren has gone down a dark path.

And he does not want the future he saw to transpire and hence he decides to ask Zeke to help him.

The shocked expression is because through Grisha’s eyes Eren also had a vision of the “scenery” that would happen in the future.

If the memory was indeed of the rumbling, then this portrays unparalleled destruction. Eren could have been shocked knowing that he would bring about mass genocide in the future and that there was no way he could stop it.

In fact, he wished for it to happen.

What do you think could be the “scenery” that Grisha was talking about? How did it bring about such a huge change in Eren?

Click to join
Eren Yeager Titans In Attack on Titan

9 thoughts on “What Did Eren See When He Kissed Historia’s Hand?”