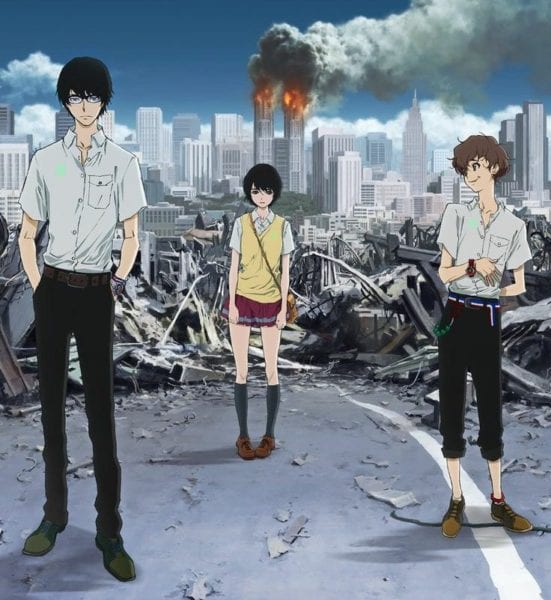 “Remember us. Remember that we lived”

They were the birds who wanted to fly; it was the weight of the feathers which didn’t let them. With a broken desire and unfulfilled wish, the duo set out to redefine something, something that felt important to them, something which made them feel significant in the eyes of others. Nine and Twelve, the nameless persona found their answers in terrorism. Directed by Shinichiro Watanabe, comes a coming of age story focusing on terrorism and corruption.

It still feels surreal, the events, the characters, the overarching stories, even the central theme – terrorism. The dreamlike story is still stuck in my head and etched in my heart. The world of ‘Zankyou no Terror‘ embodies the reality of our world and emphasizes its realism in the process, making it far more personal than it actually intended to. The series excels in portraying several emotions of the characters, which include the likes of anger, pain, agony, sadness, fear, and distress. Other than that, it also manages to focus on an underlying tone in the form of an emotion which is depicted through loneliness; this particular trait is seen in several of the main characters. The way every emotion is handled is genuinely remarkable, and the depiction couldn’t be more captivating.

For me, it was the characters that stood out, more than the plot and animation.The unique blend of dynamic and spontaneous nature of theirs made them more exciting and fun to watch, even relatable at times.Their actions had a meaning which resonated well with their ideologies. And everything was executed in an almost perfect manner. You can feel how broken they are, striving to live in a world that wasn’t made for them, especially Nine, Twelve, and Lisa, okay Five too. It was painful to smile; the smile reeked of an unknown agony, and yet it was beautiful. The series comprises of a fantastic cast which is pure, tragic, and pretty to look at; they all are the remnants of poetry lost in time. In one word – wholesome.

MAPPA once again proved why they are a serious contender in the anime industry. The animation reflects the realism of the society we live in, i.e., corrupted and innocent. The detailed backgrounds, stunning character design, smooth movements and the incredible backdrops will undoubtedly swoon you away in the fantasy land of terrorism with no casualties.

CGI is there, but it’s blended in well, don’t have any complaints from my side.

Coming to the soundtrack, Yoko Kano is a perfectionist. I don’t know how he does what he does, but whatever he does, it’s done with style and emotions. The soundtrack gives life to the characters as well as the plot; it is so beautiful to listen to the melodies composed by Kano. In the end, you’ll feel blessed and hypnotized by the music, and such is the ambience and effect of the strings and drums.

Terrorism is a comprehensive concept as a genre; one can play with the topic well if they want to. ‘Zankyou no Terror‘ tries to look like an excellent original but turns out to be a tad bit disappointing. Don’t get me wrong, I admire the show wholeheartedly, but it fails to provide the viewers what it actually deserved, not always but in some areas. I would have loved to see more of the high school lives of the boys and only if the backstory of theirs was narrated by themselves.

MAPPA experimented on certain things, which turned out to be pretty exciting, radical, and intriguing but on the other hand; it also made the show a bit more far fetched, a bit wild and even pointless in a few scenes. I loved Twelve rescuing Lisa but would have loved more if he bore the consequences of his actions; only if he found the courage and took the responsibility and prioritized his dream above all, it would have been more worth it. After all, Lisa also gave up and said that he could go. That was heartbreaking though. Still, I understand it was to create an emotional impact among viewers, but that episode didn’t well resonated with the show’s idea and themes. But yeah, that’s me blabbering, other people loved that. In the end, subjectivity is always there.

The symbolism presented, the use of Greek mythology and the thrilling action sequences are admirable and brilliant. Zankyou no Terror manages to pull an almost perfect show but misses by a mark at a few areas. But that doesn’t mean it is bad; the show lies in the upper echelons of the anime section. It did go under the radar when it was released and is still deemed as underrated, which it is. Some people don’t know about this beauty, there are people who haven’t experienced what they never will, and there are people who are lost in the chaos; this is for you, this is for us, a breathtaking experience with twisted stories and aesthetic characters.

This is for people who believe in the idea of hope.