Subaru finally gets the chance to meet the Witch of Envy! And oh boy! That was some meeting that they had. 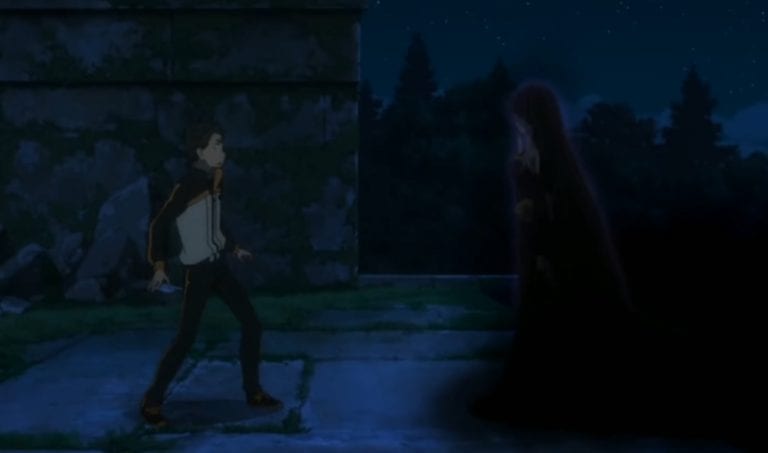 It has been a long and traumatic journey for Subaru Natsuki since he was isekai’d in Re:Zero. He has witnessed painful deaths of people who were close to him. And then he died countless times to start over and prevent those deaths from happening. Subaru was summoned to this world and granted the power of “Return by Death” change his destiny by the Witch of Envy.

If you want to read about Satella’s meeting with Subaru in the Witches Tea party, check out this blog!

However, details about who the Witch of Envy Satella was, or what her motives were, remained shrouded in mystery. Subuaru did not even have the chance to come face to face with the witch who was responsible for everything happening in his life right now, atleast not till Re:Zero Season 2 Episode 9. In this episode Subaru finally gets the chance to meet the Witch of Envy!

And oh boy! That was some meeting that they had.

Contents hide
Subaru and Satella’s first meeting:
Who is Satella? How is she related to Emilia?

Re:Zero Season 2 Episode 9 could be considered a landmark episode, thanks to Subaru’s meeting with the witches at Echidna’s tea party and the information dump that we received, especially the ones regarding the Mabeasts from Daphne!

Subaru had just returned back to the tomb after attending the witch’s tea party for a second time. He was expecting to find a heartbroken and disheveled Emilia by his side, just like his previous time loops. However, to his surprise, there was no trace of her. It was strange, because Subaru had assumed that he had returned from Echidna’s dream palace because Emilia was trying to wake him up. Thinking that Emilia might have panicked and gone outside, Subaru follows suit. And when he rushes out, he sees dark miasma (more like a shadow) swallowing up the whole of the sanctuary.

Subaru is no stranger to horrifying experiences. But what he saw there might have made his “heart stop for a brief moment”. Towering up from the dark miasma, a shape slowly took form in front of him. The uncanny resemblance of this dark shadow person to a certain half-elf that Subaru loves dearly cannot be ignored. Though Satella’s intentions are unclear, she seems to have an almost unhealthy obsession with Subaru. While this was hinted throughout the first season, it’s the first time we see the obsession take the form of a clingy love. Hugging and enveloping Subaru in the same dark shadow that is eating up the sanctuary, Satella repeats just one thing almost as if in a calm ‘frenzy’. ‘I love you.’

And that’s how Subaru comes face to face with his benefactor in this world, the Witch of Envy Satella, totally out of the blue.

Tthe meeting does not end with a simple hug. The Witch of Envy engulfs him in a sea of dark shadow. Subaru would have stayed in that situation for eternity, if Petra’s handkerchief had not come to his rescue. Well, the credit should go to Echidna here. She somehow realised that Satella would show up and added some some kind of a spell to the kerchief. When Subaru was engulfed in darkness, the kerchief changed its shape into a knife which allowed him to stab himself and “Return by Death” to his previous checkpoint (Re:Zero Season 2 Episode 10).

However, before he died, he pulled the veil off Satella’s face and to his surprise, she looked exactly like Emilia. And seeing that Subaru had stabbed himself, she had a sad look on her face, with tears rolling down her cheeks.

Who is Satella? How is she related to Emilia?

Subaru is stunned by Satella’s actions and the passionate affection she shows for him. Subaru would have been done for by the dark shadow, if Echidna had not “bewitched” Petra’s handkerchief. This meeting has set the rumour mills rolling with topics like Satella’s identity and its relation to Emilia’s disappearance.

It is known that Satella is the Witch of Envy and the one responsible for the great calamity and the demise of the other witches almost 400 years before Subaru’s arrival. She is currently sealed away by the great dragon Volcanica and the witch’s cult is looking to find a way to break the seal.

Her resemblance to Emilia in the latest episode has made many people point out the fact that the half-elf could be possessed by the Witch of the Envy during the events that happened in Re:Zero Season 2 Episode 9. That would explain her disappearance from the tomb. Also, Emilia was already being viewed as a vessel for Satella by the Witch Cult members. So it wouldn’t come across as a surprise if Satella did end up possessing her.

However, there is also another theory about Emilia and Satella’s relation which we will be explaining in a different post. Hang on till then.

What do you think about Subaru’s encounter with the Witch of Envy, Satella?Do you think Satella and Emilia are the same person or atleast related? Let us know your opinions in the comments section.