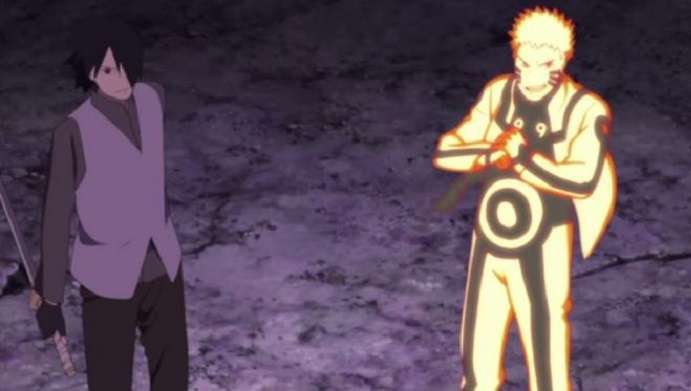 With the release of the Boruto chapter 49 there have been some crazy theories out there regarding Naruto and Sasuke’s survival.

In the latest chapter we saw Boruto also joining the fight and teleporting himself and Isshiki to an unknown place. A place where they can all fight without holding back. Although there is a risk of Boruto going berserk after getting possessed by Momoshiki, Sasuke has stated to kill Boruto himself if that happens.

However, in the flashforward scene at the start of series, we see Boruto fighting Kawaki who is most likely possessed by Isshiki at that point. Forget who he is possesed by, the point is Kawaki had a karma seal, meaning Isshiki was able to get hold of him. And if that happened, it could only mean that Naruto and Sasuke lost this battle and Isshiki was able to capture Kawaki. That leads us to the age old question, what happened to Sasuke and Naruto?

Contents hide
Will Naruto and Sasuke Die in Boruto?
How will the fight with Isshiki Otsutsuki proceed?
Momoshiki means trouble!

Will Naruto and Sasuke Die in Boruto?

Our assumption (and the authors’ belief) is that during the battle with Isshiki, Naruto will be the one getting sealed and teleported to the Chakra Eye dojutsu dimension where time does not flow. This assumption can be drawn from the statement made by Kawaki to Boruto in their fated battle. He said he’ll send Boruto to where he has sent the Seventh.

Meanwhile, Sasuke would be the one to lose his life in the battle. This can be concluded again from the first scene where we see Boruto wearing Sasuke’s cloak and headband and carrying his sword. In the last chapter also we saw Sasuke handover his headband to Boruto. The other two Boruto must have picked up after Sasuke died. That will also pave the path for a major and much needed power boost to Sarada. With no other Uchiha with Sharingan alive. Her father is the only source from where she can attain Eternal Mangekyou and a Rinnegan. She can also bear and enhance the effects of Rinnegan by using her Byakugou no Jutsu or the Hundred Healing Jutsu which she’s shown to be learning from her mother.

The main problem that our heroes face now is Isshiki and his new dojutsu powers. Mainly his dojutsu grants him the ability to shrink himself or anything to a miniscule level. The second ability which his dojutsu the Chakra Eye (The Rotating Wheel Eye) has is it can teleport anything that Isshiki shrinks into a different dimension where time does not flow. The first ability itself will become a problem for both Sasuke and Naruto as until now they have fought with beings as tall as mountains or at least of human size. Fighting someone that small is going to be a tedious task for both of them, which is why we dread that loss is inevitable for the two most powerful shinobis.

How will the fight with Isshiki Otsutsuki proceed?

Sasuke with his Sharingan might be able to see Isshiki in his shrunken form and might be able to use his lightning style to hit him (like how Sasuke pinned every tiny bomb that Deidara threw at him with his Lightning Pin Style).

But, lightning attacks of that level won’t work on someone like Isshiki.

Remember what happened to Majin Buu when Vegeto got turned into a candy? In DBZ, they at least had attacks that can destroy anyone at cellular level. In Narutoverse, nobody has that kind of powerful attack. You can say that Rasenshuriken and Bijuu dama attack at a cellular level. But for them to connect with Isshiki is the biggest hurdle here.

Secondly, Isshikis’ ability to shrink anything. He can easily shrink chakra based attacks as seen in his fight against Kashin Koji. That would mean a tiny Rasenshuriken and Bijuu dama hitting him would do almost minimalistic to zero damage to someone like Isshiki.

This is the fight where we will get to witness the awesome battle compatibility of Naruto and Sasuke. With Sasuke being the eyes and brain and Naruto being the physical beast with sensory abilities. With Sage Mode, Naruto can sense Isshiki and would be able to dodge his attacks. But without launching an offensive there’s no way they can win. The only possibility of landing a hit on the alien scavenger would be Boruto’s invisible Rasengan. If Isshiki can’t see it he can’t shrink it. All that the three heroes have to do is prepare a situation where Isshiki stays in his human size. If Boruto is able to land a hit, in that instance both Naruto and Sasuke could finish the battle with one finishing move like that of Susanoo armoured Kurama, senjutsu bijuu dama.

However, this could be their one and only chance. If they miss, then this strategy won’t work for a second on Isshiki. The simulation might look promising but it’s not as easy as it sounds. There are still chances that Isshiki could be harbouring some more dangerous abilities than just shrinking things.

There’s also a possibility that Isshiki has a Rinnegan hidden. Just like many Ohtsutsukis, Isshiki could have a third eye on his forehead similar to Kaguya. That third eye could be a rinnegan. That would make Isshiki the first being with three different kinds of dojutsu at the same time. Maybe that could have been the reason why Kaguya was afraid of Isshiki and eventually betrayed him. If Isshiki does possess a rinnegan there’s a chance that he might be able to summon the other Juubi that Sasuke found. Although it was of a different shape from the one we saw during the War Arc, it sure has almost equivalent chakra within it.

Even without the rinnegan and being heavily nerfed during his time as Jigen, Isshiki was still able to beat Naruto and Sasuke. He has also shown to be very adept with sealing jutsus that even Naruto couldn’t break. So our assumption is that it is highly unlikely that Naruto and Sasuke could win the battle against Isshiki on their own. The unpredictable factor here in this battle is Boruto. The outcome of the battle would depend heavily on what Boruto will and can do. If he gets possessed by Momoshiki then it’s game over for Isshiki, Naruto and Sasuke.

We know that Momoshiki isn’t just one Ohtsutsuki. He’s made of chakra from two Ohtsutsuki beings. If the heroes let Momoshiki battle out with Isshiki and kill him then they’ll have to do the impossible of killing Boruto or reverting him back into his human form. If Momoshiki decides to join Isshiki, then sayonara Naruto and Sasuke & thanks for giving us such wonderful memories. Although the latter is highly unlikely to happen. Also the main reason that it wouldn’t happen is because of the very first scene of Boruto.

The end of our childhood heroes seem horrible. But Ikemoto and Kishimoto told us ever since the beginning that this is Boruto’s story and that they won’t shy from killing the older generation if it’s needed for the titular hero to progress and be better.

What do you think who will live and who will die? Or are you not ready to face one of your favourite characters dying? Also it’s not just Sasuke or Naruto who are bound to die. The older generation back in the village they’ll attack with full force once they know that their two best chances of beating Isshiki are defeated. That means more characters will die and there’s no telling who all have swords hanging around their necks.
Let us know your thoughts in the comments.

Boruto: What Sasuke’s Reaction At The End Of Chapter 54 Could Mean?

Why Did Kaguya Betray Isshiki In Boruto?

Did Boruto Manga Overlook This Detail About Chakra Fruit From Naruto Shippuden?