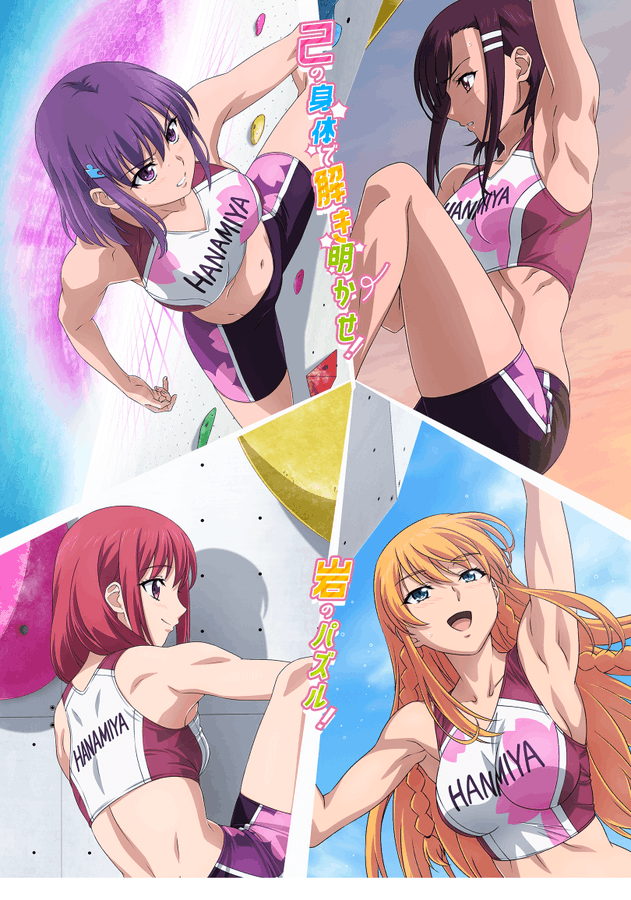 A new visual was released for upcoming anime Iwa Kakeru! Sports Climbing Girls. The official website of the anime also unveiled a new theme song “Motto Takaku”, which is performed by Aina Suzuki. This will be the first time Suzuki has performed an anime television opening theme.

The anime, which is based on Ryudai Ishizaka’s Iwa Kakeru! Climbing Girls manga, will premiere on a new late-night anime block of Asahi Broadcasting (ABC) named “ANiMAZiNG!!!”. Sports Climbing Girls will be the first anime to be broadcast in this block on ABC’s network of affiliated throughout Japan.

The TV Asahi station in Tokyo already has an ongoing NUMAnimation anime block, which airs at 1:30 a.m. on the same day. Starting in October, NUMAnimation will also be available throughout Japan, ANN reported. Sing Yesterday For Me was the first anime to be aired in the NUMAnimation block. It will be airing Zombieland Saga and Yuri!!! On Ice starting from October.

The plot of the anime revolves around girls who compete in climbing artificially constructed walls while making full use of one’s mind and body. The manga was serialized online via Cygames’ Cycomi manga app and website from December 2017 to May 2019 and was collected in four tankōbon volumes by Kodansha. A sequel manga by Ishizaka titled Iwa-Kakeru!! -Try a new climbing has also been serialized online via Cycomi since June 2019.