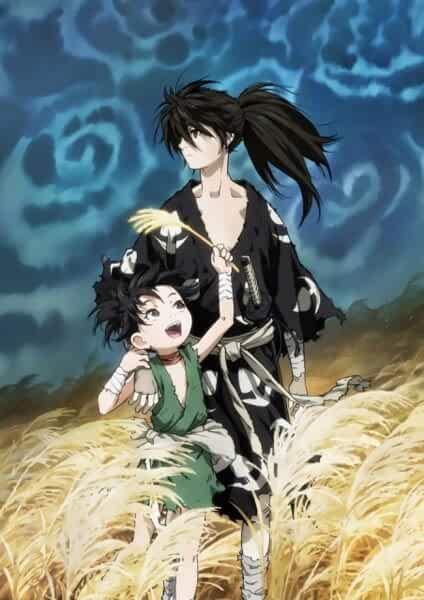 We all get lost. We all lose someone.

‘Dororo’ brings all those lost souls together and give them a home. It teaches us that tears and pain can be beautiful too.

A father in pursuit of more power, sacrifices his own son’s body parts to the twelve demons. As a result, the cursed boy is born without limbs, eyes, nose, ears, not even skin, and yet he still lives. The child is disposed of in a river and is forgotten.

Fortunately, an older man founds him and provides him with prosthetics and weapons so that the lonely soul can survive in this world.

To get his body parts back, he must defeat all the twelve demons who he was sacrificed to. On his quest, he meets Dororo and a girl named Mio.

Life is just a prolonged spiral of agony and misery. We, as humans, are often sucked into it and find ourselves lurking in the void. We all are hopeless beings rumbling around and trying to find meaning in the chaos. Exhausted, we walk towards the bridge that leads to nothingness, and in the end, it all falls apart, the cycle repeats again and again. Dororo is the embodiment of this particular notion.

Each episode is a self-contained morality tale. This isn’t a feel-good series. It is one of those series where stress and conflict are the only constant. Suffering is the only option, and sacrifice is the only reward. Death is just another sunrise, and life is the only sunset. Despite all the ‘I don’t feel good Mr Stark’ vibes, the anime withholds the power to change the very perspective of life amidst wrecked up humanity.

There are moments when Dororo requires you as an audience to ponder upon a certain set of themes that revolves around the meaning of existence, the reason for pain, the idea of agony, and the selfish nature of us. It portrays all the notions in a very apt manner and is able to grasp the underlying facets of humanity as a whole. However, the show heavily depends upon its viewers understanding of how they interpret the themes depicted. Here comes the subjectivity, not everyone will be moved by the unspoken dialogues, not everyone will be able to comprehend the selfish yet selfless acts, not everyone will be able to understand the pain Hyakkimaru went through, and it’s okay.

As people struggle through their miserable lives, there comes the point, several times, where they are compelled to change, either for good or bad. And our protagonist, Hyakkimaru, too try to claw his way back to normalcy despite his deformities and a tragic past. It’s difficult to change; it feels wrong to change, but eventually, you do because it’s the only plausible thing that remains. Or is that so? Dororo tries to answer the questions through the actions of its protagonist and boy; the show does it in a brilliant manner.

The animation is quite impressive. The hand-drawn backgrounds replete with trees, rivers, forests, and mountains in a stunning manner. Everything this anime does is shockingly well. The animation is smooth, and the sword fighting scenes are one of the very best I’ve seen in a long time, some philosophies here and there regarding life and death and the dialogues are well curated too. The soundtrack is the cherry to the cake. The music resonates with every scene, and it just seems perfect for the tone and setting of the show.

The world is immersive and deep, and while Hyakkimaru can’t speak for himself, I, as an audience, was able to feel for him with everything he was going through. It’s a transcendental experience for sure.

But every anime has its shortcomings, right?

The first half is too good. It imbibes you till the deepest end of the well and then comes the second half, it feels like a filler, there are characters just for the sake of being there and there are moments when it feels like they all are on side quests of a profound masterpiece. But at the end of the day, to understand the complete story, one must go through all the hardships and suffering, and that’s what Dororo is all about. Being patient has its merits, doesn’t it?

Nonetheless, I enjoyed it. Thoroughly.

Lying, not throughout, but yeah, I enjoyed most of it. So if you’re diving in this historical-fantasy world, then be prepared for an adventure that is violent, hopeful, at times tragic but ultimately a delight.

It’s for people like us who still believe in hope, or atleast in the idea of hope.