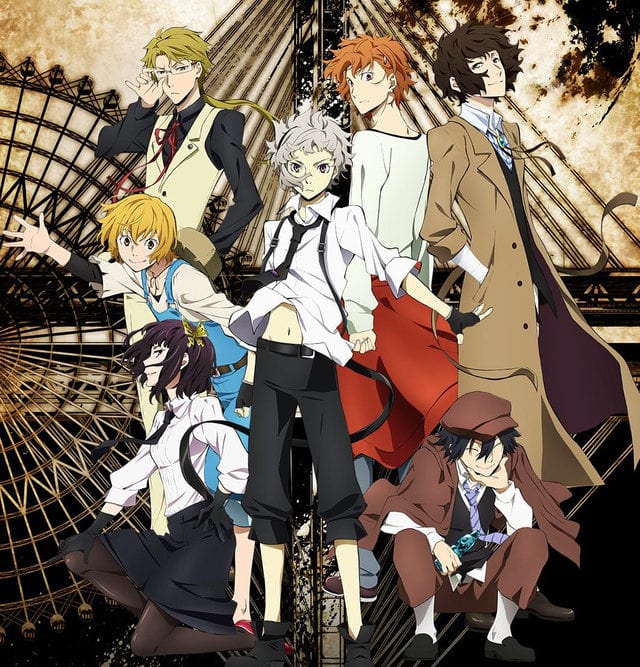 If a tree falls in a forest and no one is around to hear it, does it even fall?

What if I told you that there exists a story that dives into the grotesque parts of humanity gracefully and let you have a taste of everything that is convoluted, simple, and hopeless at the same time. Will you watch it or shelve it off as another generic anime?

So what happens when you get together a select group of individuals based on famous literary figures and give them supernatural powers based on their most famous works?

Well, Bungou Stray Dogs it is.

I won’t bore you with the synopsis, but basically, it revolves around three organizations that have conflicting notions (not always) and desire power, authority, and aristocracy in the city of Yokohama.

Bungou Stray Dogs is the prime proof that supernatural fiction can still turn out to be brilliant if done correctly. The uniqueness of the show lies in its vibrant and diverse characters. Everyone in the series passes the vibe check and has a charm of their own; the side characters shine more than the protagonist here. The name ‘Osamu Dazai’ will be etched in your mind for a very long time after watching the show. Blended with dark humor, supernatural stuff, eerie mysteries, and bizarre nature of the characters, the show might swoop you off your feet and deliver the extraordinary x-factor you had been looking for a long time.

Bungou Stray Dogs comes off more as a character-driven show rather than a story-driven one. It seems like everything that happens in it is the ramifications of the characters themselves, and the story just appears surreal or is there as a support pillar to the development of the lovely characters. The sad part here is that people often aren’t imbibed in a character-driven show and put it off from their watchlist. This is one of the key reasons why the anime never made a mark of its own. But that doesn’t mean it hasn’t a good story; the shonen series is packed with a compelling and complex storyline curated and presented in a charming manner.

Talking about the animation, it’s elegant. It’s like a beautiful painting hovering upon my eyes, a spectrum of brilliance. The dull tone, rich color palettes, and fluid movements do the show a fantastic justice. It resonates well with the setting and colors and can tell a story on its own. The first season of Bungou Stray Dogs might not be the best in terms of animation, but Bones for the second season decided that boy it’s time for vast improvement, and they did deliver above anyone’s expectations.

The action sequences are very well choreographed and is a breath of fresh air from all the nonchalant melodramatic fights. The supernatural combats surrounded by tension and fear certainly did magic there to me as an audience. It doesn’t get much repetitive and always manages to make me go awe with the spectacular fights. Watch out for Odasaku vs. Gide in the second season.

Where do I start with the soundtrack of this gem? Bungou Stray Dogs has one of the most sensational music of our time. Every tone and beat match perfectly and can enchant one’s soul in an eternity of blissfulness.

The OPs and EDs of all the seasons are quite good and don’t disappoint with unnecessary, prolonged, and repetitive lyrics and music. Everything seems just perfect. The music reeks of “If these aren’t the best OP and ED you have listened to, you are lost, my child.” Furthermore, the symbolism in the ED among Dazai, Akutagawa, and Atsushi is beguiling for my mind and soul.

I don’t like to do this, but here I go anyways.

There are flaws in the anime. I don’t like the protagonist himself, but at the same time, he holds the very foundation of the story too. In the first season, Dazai’s stupidity and his forced-jokes are there, ringing my ears in every episode, I mean one is bound to get bored a little by the monotonous kind of humor but it can be overlooked. Then there were these innumerable Atsushi’s flashbacks; I don’t know how many times I saw it, what was that? Was he trying to be Naruto?

To put it bluntly, it’s a very unorthodox piece of art meant for a niche community and not everyone. Despite its disastrous first few episodes, it somehow still manages to impel me to watch the rest of them, and I’m grateful for it. It’s for people like us who believe that we, as humans, are hopeless romantic of life and death. It’s the dessert the world never knew of, and it probably never will.

So I’ll ask it again,

“If a tree falls in a forest and no one is around to hear it, does it even fall ?”

Well, Bungou Stray Dogs has always been that tree!

There will come a day when people will realize the brilliance of Tatsuki Fujimoto. Till then Kakushigoto, animanga and oreo shakes.