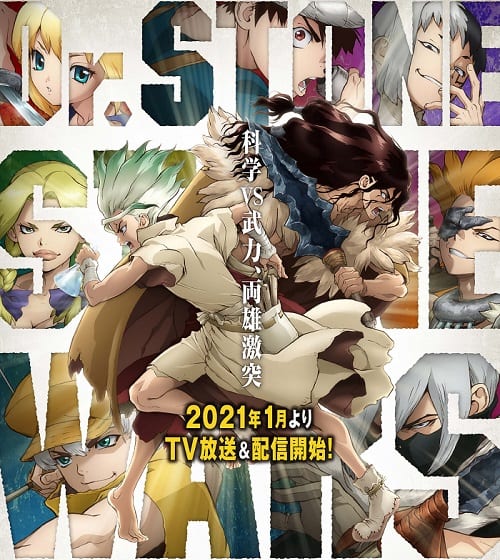 The official website of the Dr. Stone anime released a teaser PV which reveald a January 2021 premiere date for the second season Dr. Stone: Stone Wars.

The second season will focus on the face off between Senku Ishigami’s Kingdom of Science and Tsukasa Shishio’s Empire of Might. The plot is previewed in the teaser trailer of the second season.

Key visuals for the second season were also released along with the teaser.

The cast and staff of the anime have not been revealed yet.

Based on the manga series written by Riichiro Inagaki and illustrated by Boichi, the plot focuses on Senku Ishigami, who plans to kickstart civilization with the power of science after the world reverted to stone age as humanity was petrified by a blinding flash of light for more than 3000 years.

The manga was serialized in Shueisha’s Weekly Shonen Jump and has been collected into 13 tankobon volumes as of November 2019. The first season of the anime adaptation aired in July 2019, with Crunchyroll streaming the anime as it aired in Japan.

The animation for the second season will mostly be under TMS Entertainment.