Skip to content
Home » Series » My Hero Academia » Why Did All Might Choose Izuku Midoriya To Be His Successor?

Why Did All Might Choose Izuku Midoriya To Be His Successor?

Surprisingly, All Might’s decision to choose Izuku MIdoriya as the successor of One For All is something that managed to split the fandom of My Hero Academia, especially after the introduction of Mirio Togata aka Lemillion.

All Might’s decision came as a surprise to both Principal Nezu and Sir Nighteye, who had favoured Mirio to be the next inheritor of One For All.

All Might’s reason revolved around the fact that Midoriya had shown the qualities of a true hero which prompted him to give One For All to him. However, Mirio himself embodied all the qualities that a hero needed. He trained himself better than Midoriya thanks to his potentially dangerous ‘Permeation’ quirk that could very easily kill him. He had the ability to smile while confronted with potentially dangerous situations and also stand in the face of overwhelming odds (as seen in the fight against Chisaki and Chrono).

The anguish only increased after Mirio’s selfless sacrifice to save Eri.

So, knowing that a candidate like Mirio existed, why exactly did Toshinori Yagi aka All Might choose a quirkless middle schooler who he met for the first time, to pass on not just a great quirk like One For All but also a huge responsibility to him.

All Might chose Midoriya over Mirio and others because he was able to resonate the most with Midoriya and was more of a hero than the others according to him. Also he had not met Mirio till then, which played a huge part in the decision!

Before their fateful encounter, Izuku Midoriya was just another quirkless kid who wanted to be a hero and All Might was heading into retirement, getting ready to pass on his quirk to a successor. Apparently he was going to have a meeting with Mirio Togata and principal Nezu soon. That’s when the whole incident with the Sludge villain took place.

When Bakugou was taken captive by Sludge, it was a powerless Deku, and not the pro-heroes with their awesome quirks, who jumped him to save him. He did so without even giving a thought about his own safety.

Here was someone, whose hopes of being a hero were just crushed by his own idol. And yet this quirkless boy plunges in to save his friend in the face of extreme danger. This brought All Might back to his senses, reminding him that it’s not a person’s power/quirk that defines whether he will be a hero or not. Deku’s actions thus ended up inspiring All Might to push himself to his limits.

Before getting One for All from his master, Nana Shimura, Toshinori Yagi was quirkless too. All Might saw himself in Deku and was moved by his actions. While this was one of the most important reasons why he chose Deku as his successor, it was not the only one. All Might was also convinced by Deku’s abilities to think on his feet and quickly form a plan.

Another important insight about All Might’s decision to choose Deku is given in Season 3 of My Hero Academia, when he replies to Bakugou’s question. According to All Might, people like Bakugou and Todoroki were already on the path to become great heroes because of their quirks. That’s why he wanted to give a powerless Midoriya, who also had all the qualities to be a great hero, a chance to stand alongside them. 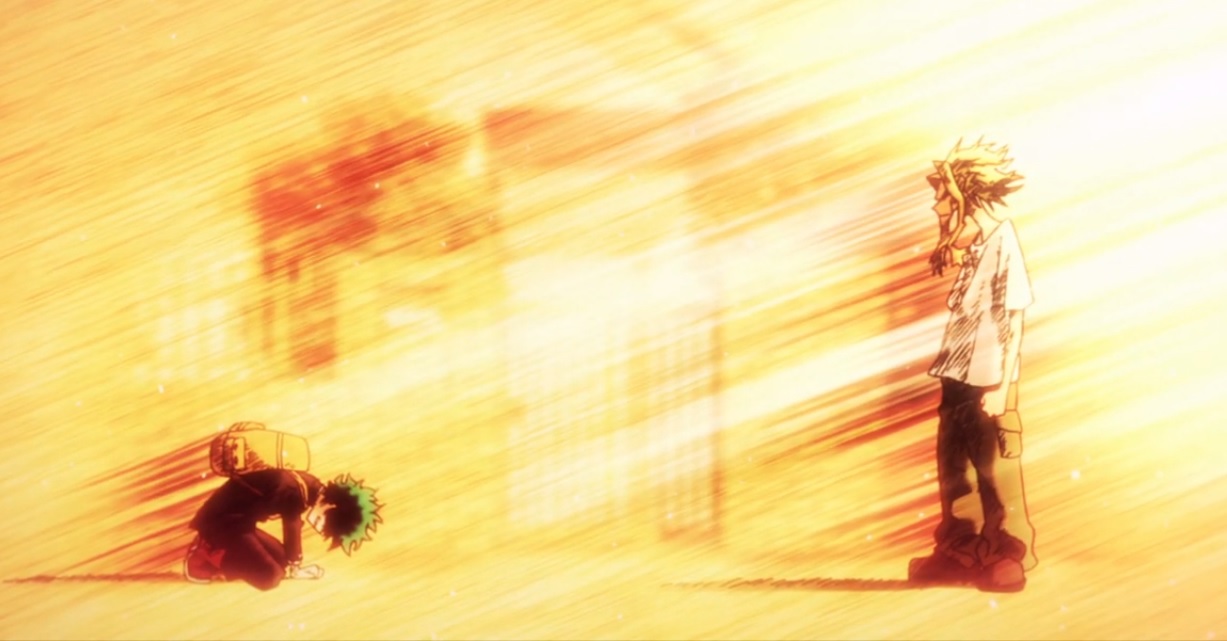 We can also draw parallels between All Might’s decision to choose Deku and Captain America being chosen in the movie.

Because the strong man who has known power all his life, may lose respect for that power, but a weak man knows the value of strength, and knows… compassion

Now, let’s consider the real situation here. Deku was probably very lucky. If he had not met All Might during the Sludge villain incident, One For All would have passed down to Mirio Togata or someone else who was equally heroic. In the world of My Hero Academia, there is not a shortage of heroes who are good enough to shoulder the responsibility of having a quirk like One For All given to them. But in the end, it was Deku who got it.

Luck? Yes. Chosen One? Yes. The quirk was All Might’s to give and he gave it to Deku.

The most important part, he is working very hard so that he can live up to the expectations that are placed on him. Both Nighteye and Gran Torino come to accept him due to his actions later in the series. That should be enough to prove that All Might was not wrong in his decision of choosing Izuku Midoriya as his successor.

Be sure to smile after all without joy and laughter to balance the sorrow, this world cannot hope to have a bright future…

In the end, a quirkless boy acting instinctively as a great hero was all it required for All Might to make his choice.

Click to join
Izuku Midoriya Mirio Togata One For All