Is Killing Jigen Enough To Nullify The Ohtsutsuki Threat In Boruto? 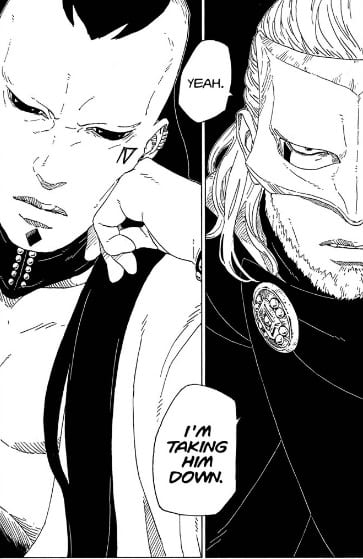 Chapter 46 of Boruto: Naruto Next Generations manga ends on a cliffhanger with Kashin Koji poised to kill Jigen, the leader of the mysterious organization Kara. As Amado says, we’ll soon get to know how an Ohtsutsuki can be killed!

However, killing Jigen won’t necessarily stop the threat that the Ohtsutsuki clan poses to the planet, because Ishhiki, the Ohtsutsuki member in control of Jigen’s body, has already transferred his karma to Kawaki, who will end up being his new vessel in the future.

Contents hide
Why killing Jigen won’t be enough:
In that case will Momoshiki end up controlling Boruto?

Why killing Jigen won’t be enough:

From what we have seen in Boruto Manga so far, the Ohtsutsutki clan members would go to various planets and harvest the chakra of that planet using the God Tree. The God Tree would then bear a chakra fruit, which was consumed by the Ohtsutsukis giving them more power and a prolonged life.

Isshiki Ohtsutsuki and Kaguya Ohtsutsuki had come to earth long back for the same purpose. However, the two had a fallout and Kaguya almost ended up killing Isshiki. While he was fleeing, a badly injured Ishhiki came across Jigen. Not having enough power to give Jigen a karma seal, Isshiki ends up possessing his body in order to survive.

From inside Jigen’s body, Ishhiki has been planning and scheming to resurrect himself and carry out his original plan. Working towards his objective he became the leader of the organisation Kara, and along with the Inners in the group, decided to obtain the chakra fruit by cultivating a new God Tree.

After joining Kara, Jigen’s body was modified with scientific tools so that it could endure Isshiki’s tremendous chakra. However, Isshiki realised that this body was not suitable as a vessel for him as it would be destroyed from having to handle the enormous chakra that he would possess once resurrected. And so he carried out an experiment with Amado, in which he transferred the karma seal to 15 boys. Kawaki was the only person who survived the experiment and thus became the new vessel for Isshiki Ohtsutsuki. Isshiki then began training Kawaki so that he could master the use of the karma seal.

So, given the current scenario, even if Kashin Koji manages to kill Jigen he won’t be able to nullify the threat posed by the Ohtsutsuki clan. Because, even though Jigen dies, the Karma seal will continue to transform Kawaki’s mind and body into that of an Ohtsutsuki until Isshiki can be reborn again. Albeit this time, Isshiki will be more formidable, having resurrected in a suitable vessel which would allow him to use his full powers.

Unless Naruto, Sasuke and the others find a way to stop the effects of Karma Seal, Isshiki will almost certainly end up being resurrected in Kawaki’s body and Momoshiki in Boruto’s body. According to Amado the only way to prevent this outcome is by killing the vessels. However, Naruto and the others won’t resort to such a plan and will try to find an alternate solution (the main character will not be killed, simple).

Looking back at the teenage flashforward scene at the start of the series, we think that Isshiki will certainly end up taking control over Kawaki’s body. While there was no physical manifestation of the Ohtsutsuki of any sort in him, Kawaki’s hostile behaviour towards Boruto certainly raises some red flags.

From this point of view Kawaki warning Boruto that he will send him to the same place he sent the Seventh Hokage makes perfect sense. It can be interpreted as Kawaki threatening to kill Boruto (meaning Naruto was already killed by him?).

In that case will Momoshiki end up controlling Boruto?

From the flash forward scene, it seems as if Boruto is still in his senses. Also he is seen using his Jougan, meaning the mysterious blue eye has a major role to play in the future. Could Jougan be the key in stopping Momoshiki from being resurrected? We have no idea (especially because it’s claimed to be a troublesome power).

The way the plot has been developing (especially the whole clamour regarding Kashin Koji being Jiraiya), it seems that Jigen has a high chance of being defeated by Kashin Koji. Whether he gets killed or escapes and hides to recover is something that needs to be seen. The next chapter of Boruto will be filled with action and some much needed information and identity reveals. Depending on how it progresses, a lot of things will start clearing up in the manga.

What are your views on Jigen dying? Do you think it will be a vital turning point in the manga? Let us know your opinions in the comments section!