My Hero Academia Chapter 273 Review: The Heroes Are In Trouble! 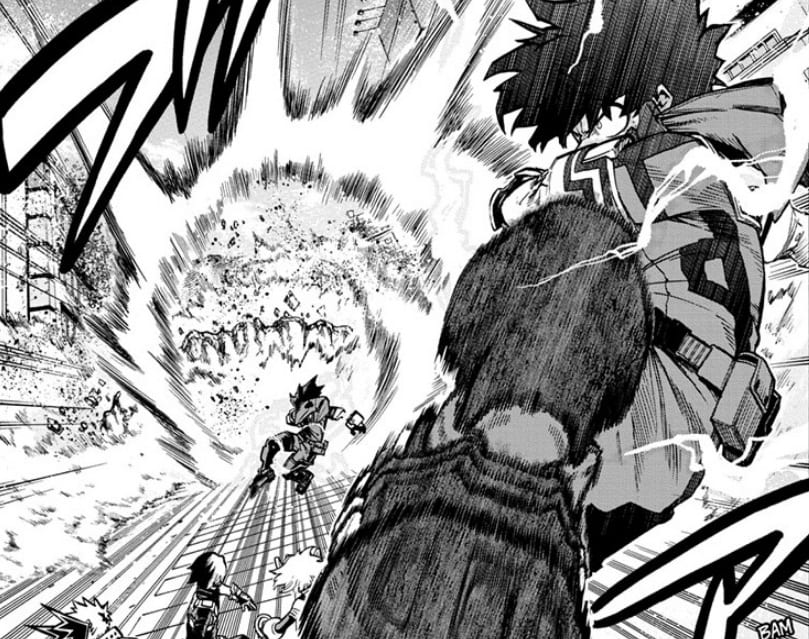 We knew things were going downhill for the heroes when Shigaraki Tomura awakened from his slumber. However, seeing the extent of his power, it is clear that the situation is far worse that what we imagined.

My Hero Academia Chapter 273 titled “The Thrill of Destruction” reveals the extent of damage that Shigaraki has done to the hospital and the surrounding areas. Deku mistook the decay for a shockwave and attempted to stop it with his St. Louis Smash at 45 percent full cowl. But Ddeku’s smash was rendered useless and Todoroki’s ice wall crumbled to dust in front of Shigaraki’s newly awakened powers.

Realising that the only way to survive the decay was to run, Deku and the others grab the citizens nearby and flee. Bakugou saving people, carrying them with his mouth, is a very Bakugou thing to do. Ochaco, Tsuyu and the others pitch in too.

Deku seems to be gaining more control over the black whip as he used it to haul vehicles and people towards safety. Gauging from what we read in the chapter, Sigaraki’s decay spreads to things which are in contact. This spells doom for a close combat fighter like Deku who can’t literally get near Shigaraki in his current form.

Having a quirk like blackwhip or awakening Nana Shimura’s float is a must for Deku if he is hold his ground agains the newly awakened Shigaraki Tomura.

A huge part of the city was put to waste by Shigaraki with ease. A lot of pro heroes were caught in the decay and crumbled to dust. Since Shigaraki has All For One (AFO) now, it’s only plausible to think that he could have stolen all of their quirks. The only sving grace for the heroes here would be if Shigaraki has not yet fully mastered the use of AFO.

In the wake of the destruction, Shigaraki stands on the small structure from where he unleashed his quirk, the only place that did not crumble to dust in the massive decay wave. Looking at the obliterated landmass around him like an artist admiring his work, Shigaraki goes on to summon Gigantomachia and the other villains over to the ruins of Jaku Hospital.

Now that he has regained his memories and broken free from his shackles, Shigaraki seems more composed. He has gained better control over his quirk, only decaying things when he wants to. But his crazy love for wanton destruction is still visible in his eyes.

The quirk destroying bullets that were out of the picture for sometime, make a return in this chapter of My Hero Academia. The doctor was apparently helping the league of villains manufacture more of those bullets based on the ones that Shigaraki and gang stole from Overhaul. Though X-Less (R.I.P) destroyed the cooler, damaging most of the bullets inside it, it looks like Shigaraki still has some left to use when faced with a dire situation.

Back at the Gunga Mountain Villa, Mt. Lady, Gang Orca, Cementos, Fat Gum and the others are fighting on the front lines against the paranormal liberation army. Losing her cool after Twice’s death, Toga goes on a rampage catching the pro-heroes unawares, making things hard for them. Having a villain in disguise among your ranks in the is the worst possible thing that could happen to the heroes, especially due to the fact that Machia has begun acting up on Shigaraki’s orders .

The party is about to start for the league of villains and the paranormal liberation army.

Things are going to get really messed up for the heroes. Gigantomachia alone would command the attention of a large number of the pro-hero forces. The only ones that can go up against him near the villa are Mt. Lady, Fat Gum, Kirishima and the others who have brute force and high endurance. However, it goes without saying that they are no match for the huge monster.

The chapter ends with Endeavor swooping in on Shigaraki to face him. While we are more than excited to see this match-up, there’s a feeling in our hearts which says it won’t end well for Endeavor. We are surprised to see that Shigaraki remains uber calm even in the face of disaster. Can Endeavor stop him, or will Shigaraki topple the current number one easily? This arc just keeps on getting exciting!

What are your opinions on My Hero Academia Chapter 273. Let us know in the comments section!!!

How Will Hiroshi Tameda React To The Dabi Reveal In My Hero Academia?