Demon Slayer Chapter 205: A Happy Yet Somewhat Disappointing End To A Great Series!

Expectations were soaring high when Koyoharu Gotouge teased a timeskip in Chapter 204 of Demon Slayer manga, with fans cooking up a lot of interesting ways the series would end, with the hope of a sequel. But, Chapter 205 of Demon Slayer: Kimetsu No Yaiba manga pours water on all the hopes of the fans … 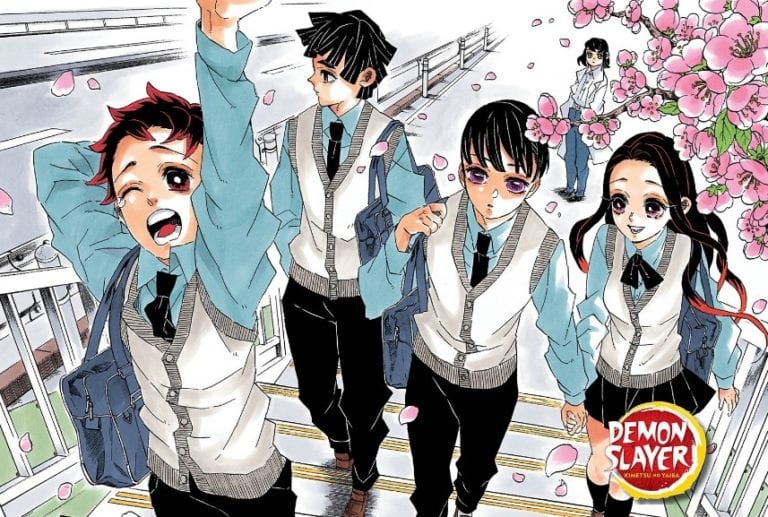 Expectations were soaring high when Koyoharu Gotouge teased a timeskip in Chapter 204 of Demon Slayer manga, with fans cooking up a lot of interesting ways the series would end, with the hope of a sequel. But, Chapter 205 of Demon Slayer: Kimetsu No Yaiba manga pours water on all the hopes of the fans as the chapter focuses on reincarnations of the main characters and their happy endings.

Demon Slayer manga has been rushed to say the least for the last 20-30 chapters. However, after a solid run of over 200 chapters in Weekly Shonen Jump, fans were expecting more out of the ending. But then the chapter kind of falls flat, as it seems the series was wrapped up in haste without fleshing out a proper conclusion for the character arcs that we grew close to over the past few years.

Given the immense popularity of the manga, it was also expected that the final chapter would leave a scope for sequels open, so that the mangaka can come back to it in the future, that too did not happen.

However, some of the fan favourite ships were confirmed in the final chapter (from the looks of the future generations) and it was one the highlights in a list of few from Demon Slayer chapter 205.

An apt description for Demon Slayer Chapter 205 would be fanservice at its best. While it is true that the protagonists of the series fought against the demons putting their lives on the lines so that their future generations could have a better peaceful life, this epilogue still does not feel like a proper ending to the manga.

We would have loved to see more incidents from the lives of Tanjiro, Zenitsu, Inosuke and the others, how they decided to carry on with their lives after the demon slayer corps was disbanded, who did they settle down with, their marriage, children etc etc etc. But then we get characters from 2-3 generations into the future with whom we don’t feel a connection at all. Not even with the reincarnations ending up having the same face as our heroes.

That said it was still heartwarming to see the way some things played out, especially, Mitsuri and Iguro are married in the future, meaning they effectively kept the promise they made to each other (Remember Mitsuro asking,“Iguro, Iguro, please if we get reborn, if we are born again as humans, will you make me your wife?”). Also, the Ubuyashiki kid whom we saw in chapter 204, is now the oldest living man in Japan, a fortunate turn of events, if you’d ask us.

And yes, Zenitsu has apparently written a book about the struggles of the Demon Slayers and their fight against Muzan. Seeing how his great grand-daughter claims that the book is nothing but a “a novel of lies”, we are sure he wrote about how he bravely put himself in between the love of his life and a demon Tanjirou, eventually overpowering the latter with his amazing breath of thunder and claiming Nezuko’s hand.  The book is titled ‘The Legend of Zenitsu,’ so there we know what sort of stories it will be made up of!!

There isn’t much info to go into depth about the new characters. They probably don’t even know much about their ancestors. But watching Sumihiko (Tanjirou’s descendant) and Tojuro (Rengoku descendant) perform all those parkour moves with ease makes us wonder if the breathing forms have been passed on to them in some form or the other.

The last panel is where our hearts really tear up. Watching the one big happy group photo knowing that we won’t have any Demon Slayer chapters to look forward to in the coming weeks really makes us sad. While it would have been wonderful to see the arcs of the characters we held close to our hearts coming to a peaceful conclusion, it is important to congratulate Koyoharu Gotouge on a job well done and keeping us entertained for all these years despite the slight drop in quality towards the end.

With light novels and Hashira spin-offs announced, the Demon Slayer: Kimetsu No Yaiba franchise still has a lot of untapped potential and content which it can continue to offer the fans in the coming years. We sincerely hope that Ufotable and the Demon slayer anime creators try to plug the holes that were visible in the later stages of the manga and make the series an even better experience for the fans.

Thank you Koyoharu Gotouge, and thank you Demon Slayer for all the thrills, excitement, joy and sadness that you gave us! You will continue to hold a special place in our hearts. It has been a wonderful ride for sure!