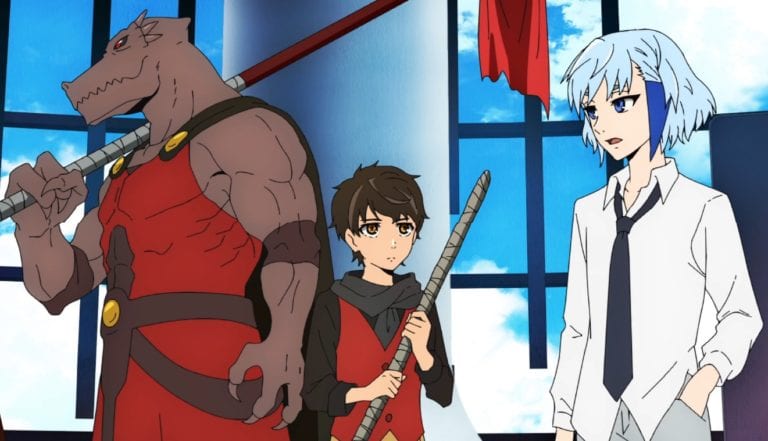 Tower of God episode 2 is out on Crunchyroll now and manages to meet the expectations put on it by the gripping premier released last week. The second episode answers more questions about the Tower itself and the world around it. We are introduced for the first time to concepts like “rankers”, the people who have managed to climb the tower and the “shinshu,” a divine water (sort of thing) which is the source of the tower’s power and used by the regulars within the tower to fight.

The episode also sheds some light on the regulars and irregulars, particularly how irregulars are extremely strong people. Tower of God also manages to add some comic elements in this episode in the form of Shibisu and also Rak to some extent which is a welcome addition. In short this episode is more of a fun ride than the first episode which had a grim tone set throughout.

After successfully passing the first test set by Headon, Bam has now proceeded to the second level, where he encounters the mysterious Khun and the raucous Rak. Rak has all but one intention, to hunt, and Bam, due to the presence of a powerful weapon in his hand, becomes Rak’s prime prey. Khun initially tries to leave Bam and Rak to settle things on their own, but then changes his mind and helps out Bam after the “Black March” catches his attention.

What you need to climb this tower the most is luck

The episode quickly winds up the second challenge, with brief glimpses of some contestants, who could prove to be important as the story progresses. Bam and Khun manage to survive the test in the nick of time as Rak catches up with them. However, another test quickly follows and the survivors are now asked to form three man teams.

Foes get turned into allies as Rak is forced to team up with Bam and Khun in the end and they progress to the next stage.

The forming of teams isn’t exactly the best thing to happen to Bam. All participants seem to have their personal motives for wanting to ascend the tower, which makes it all the more difficult to trust them. These are people who minutes ago, did not hesitate to cut down each other based on orders given to them.

While Khun seems to have ulterior motives and keeps us guessing as to what his endgame is, Rak on the other hand reminds us of Inosuke from Demon Slayer. At one point he was ready to give up his hopes of climbing the tower just to have a fight with Bam. He was undoubtedly the attraction of this episode as he managed to provide the thrills and laughs when required.

As Bam and his new formed team await further instructions along with the other regulars who cleared the previous challenge, we are introduced to the test administrator Lero-Ro, a nonchalant ranker with a lazy voice. Unimpressed with the large number of participants who had managed to pass, he throws a surprise challenge at them in order to cull their numbers.

Using shinso, Lero-Ro creates a barrier which the contestants are forced to cross in order to proceed to the third test.

This is where the episode gets interesting. All of the regulars in the room get pushed behind by the force of the barrier, except Bam, who stays unaffected by the shinso barrier. While the administrator tries to pass this off as a mistake, saying Bam was lucky, he makes a mental note of Bam wondering if he was a monster.

Bam then proceeds to ask the ranker about the irregulars and we get more insights about the Tower. According to what Lero Ro tells Bam, the tower is divided into three sections, the outer tower, which is the residential district, the inner tower, where currently Bam and the regulars are and the middle area which connects these two sections. Only the regulars and the people from the outer section who are chosen by Headon are the ones who are allowed to climb the tower. However, sometimes outsiders who are not chosen by  Headon get inside the tower and they are called the irregulars.

That’s some interesting information to build on what we learnt from the previous episode, as we know that Bam is an irregular from the outside world. Lero Ro also mentions that he has not seen Rachel and asks Bam to stay wary of Khun. As the episode progresses more regulars pass through the shinso barrier including Khun and Rak, however after listening to what the ranker had to say, Bam is now unsure whether to trust (or to understand the motives of) Khun and would definitely try to uncover more information about him.

Towards the end, we see a guy mentioning Khun’s name implying there is more to him than we has been revealed right now. This sets the tone for Episode 3 of Tower of God as more interesting things are set to come up including the third test, for which Bam and the others are gearing up!

On the downside, the episode still seems a bit rushed and Crunchyroll could have spent more time on building up the world of TOG and giving the side characters some more of a backstory. But it’s only the second episode and might be unfair to complain, but still lets hope that more time could be taken to build the world of Tower of God. What was your opinion of the second episode of Tower of God, let us know in the comments section!!