My Hero Academia Season 4 Finale Goes Above & Beyond 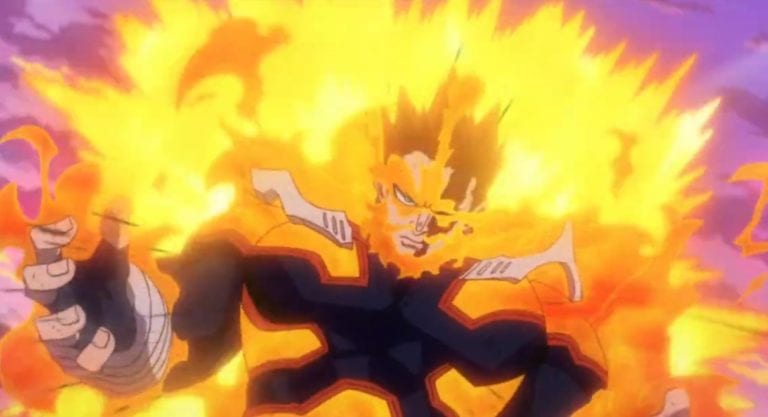 Warning, this article contains spoilers for the latest episode of My Hero Academia Season 4 Episode 25, “His Start” If you still haven’t watched the latest episode, you can watch it on Crunchyroll and Funimation!

Boy oh boy what an episode that was. It was perhaps the best way to end My Hero Academia Season 4, given that the series has managed to break barriers of expectations throughout. There was much hype surrounding the finale My Hero Academia, with the previous episode leaving fans on a cliffhanger as the newly declared number one hero Endeavor gets ready to face off with a genetically modified Nomu, who appeared out of nowhere.

Looking back, this episode is right there at the top in terms of action and plot and could easily trump “Infinite 100%.”

From the go, the episode titled “His Start” was all about Endeavor redeeming himself, facing his past and trying to live up to the expectations placed on him as the new number one hero. As the episode begins, we see Rei Todoroki (Shoto’s mother) visited by her children Natsu and Fuyumi, complaining about how their father had always ignored his family and harassed them. However, strangely Rei sides with Endeavor, saying that he is certainly not leaving his family behind.

The focus then shifts to the fight between Endeavor and the genetically modified Nomu. The word intense would fall short to describe the fight, and it could very well be among top face-offs in the history of My Hero Academia, rivaling All Might’s final stand against All For One in Kamino. Laced with emotions and will power the fight makes you sit on the edge of your seat and gives you those goosebumps.

Though Endeavor’s new suit allows him to levitate and move around in a much better way, the Nomu’s superior speed and regenerative abilities put him at disadvantage. As Endeavor tried to hold off the Nomu, Hawks saved the people who were stranded in the vicinity of the fight. We gain more insight into Hawks quirk, “fierce wings”, which allows him to control each one of his feathers the way he wants. He could easily carry people on one or two of his feathers, a pretty impressive quirk for sure. However, he does not have the explosive power or resistance needed to take down the Nomu and decides not to be a part of the main fight.

Unlike the previous Nomus, Endeavor notices that this one could speak, could perceive situations and had the ability to think, which makes him decide to capture it alive. However, for most of the fight Endeavor is pushed to the back foot and is on the verge of losing. The fight also points at the unforgiving nature of the society in the hero world, as some of the news reporters quickly write off Endeavor as he was losing, implying that Endeavor was not nowhere near to being the symbol of peace that All Might was. While that might be true, My Hero Academia does well to highlight the attitude of people, who, in a distress, chose to stop believing in something as soon as things start getting bad is all too familiar and something that we get to see frequently.

But then as people seem to lose hope in Endeavor, a fan points out that he has not lost yet nor given up and is risking his life to save the people. This rousing moment sets the tone for the rest of the fight which only keeps getting better.

As the episode shifts to Endeavor’s point of view, we see the flaming superhero is giving his all and refusing to give up even though the physical toll on his body is quite high. He thinks back to the promises he made, of being a hero Shoto can be proud of, he thinks about his family and is overcome by guilt of how he treated them and as he faces all his mistakes from the past he pushes himself to the very brink trying to take down the bioengineered Nomu.

Back at U.A. Shoto was watching as his father got beaten up, but to everyone’s surprise instead of continuing to reject him, he appreciates the efforts Endeavor was putting in. You could feel the moment as Todoroki shouts that he is watching, as a way of motivating his father to win.

Supported by Hawks, Endeavor goes above and beyond for a final attack on Nomu. Seeing that it was difficult battle to win he decides against capturing the Nomu alive and goes for the kill. We could forgive you for thinking that My Hero Academia would kill off Endeavor as he continued to push himself to the limits to take down his enemy, because that was the kind of fight it was. It had everything in it to make it the last stand of a much loved hero, as Endeavor, who even after get hit multiple times and not being able to move his body, catches up with Nomu with assistance from Hawks, flies higher to spare the buildings and people from getting affected as he let loose his quirk screaming “Plus Ultra”. We are not going to lie, the scene definitely gave us the goosebumps.

Our hearts missed a beat, as Endeavor crash landed after incinerating the Nomu, fearing the worst. However, though badly beaten up, Endeavor emerges victorious in his first real challenge as replacing All Might as the symbol of peace. At this point even haters would have cheered for him, that is the kind of redemption arc that My Hero Academia gave him in a single episode. All the small changes that Endeavor went through added up in this grand finale of an episode and it reflected in his actions as he tried to live up to his new role.

All Might, who was watching the broadcast of the fight from U.A. seemed relieved and happy to see Endeavor being able to win.

While it was Endeavor who stole the show, we have words of appreciation for Hawks too, who ably supported the current number one. We are hoping that these guys team up a lot more in the future as they seem to share a good chemistry on screen and are fun to watch.

As the episode winded down, we had the usual post credits scene which is a part of My Hero Academia’s season finale. This season’s scene was particularly interesting as Izuku Midoriya seems to have a dream about the previous holders of One for All, and it looks like he has uncovered some information about the quirk that was passed on to him. We could speculate a lot about what the secret could be, but unfortunately we will only get answers when My Hero Academia Season 5 comes out.

This episode was certainly among the best episodes of the season ending it on a high, making us look forward to even more action, adventure and drama from the upcoming. Season 5 of My Hero Academia will pick up from the “joint training arc” from the manga and we can’t really wait to see what happens once that comes.