Infinite 100% was one of the best episodes in the Shie Hassaikai arc in My Hero Academia and “Bright Future”, which follows it had big shoes to fill, considering the fact the fight was already over. But the episode, though less on action and glitz, has some major plot points and emotional moments and manages … 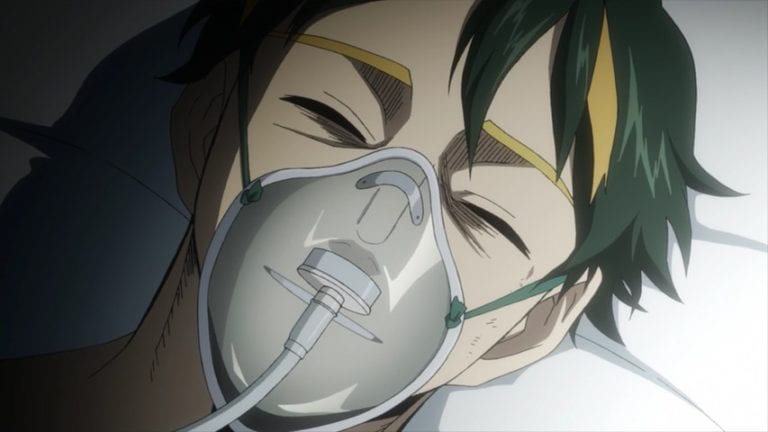 Infinite 100% was one of the best episodes in the Shie Hassaikai arc in My Hero Academia and “Bright Future”, which follows it had big shoes to fill, considering the fact the fight was already over.

But the episode, though less on action and glitz, has some major plot points and emotional moments and manages to hold on its own without disappointing.

Warning, this article contains spoilers for the latest episode of Boku No Hero Academia, “Bright Future.’ If you still haven’t watched the episode, you can watch it on Crunchyroll and Funimation!

The episode begins with a bang, showing the ending moments of the fight between Deku and Overhaul. But the problem with this was that major portions of these scenes were already covered in the previous episode, taking the thrill and fun out of it.

But then, Midoriya destroying Chisaki was also worth a rewatch. So we are not going to complain too much.

The latest episode of My Hero Academia then focuses on picking up the pieces and cleaning the mess created by Overhaul and his gang. Aizawa, who was largely missing in the last episode was saved by Tamaki (Suneater) and the police before anything bad happened to him. He then saved Midoriya from being completely obliterated by Eri’s quirk.

The highlight of the episode however came towards the middle, as Shigaraki and his minions made an entry and stole the permanent quirk erasing bullets from Chisaki, who was being escorted by the police after his capture.

With the main Heroes all injured or caught up with the clean up at Shie Hassaikai’s place, it was a new hero, “Sand Man, Snatch” who was tasked with stopping the League of Villains.

However, Shigaraki, Dabi( yes we see Dabi in this episode) and company are able to get their hands on the bullets without much of a fuss. During the encounter Shigaraki destroys Chisaki’s arms preventing him from using his quirk.

My Hero Academia helps us connect with Chisaki in “Bright Future”, as we see more flashbacks from his life. His past and Shigaraki’s past seem eerily similar and seem to have similar goals. While one is very eccentric in his approach other is methodical.

Shigaraki mocking Chisaki saying “Who’s going to be the next leader again?” and destroying his arms to make things even was certainly one of the highs in the episode. Chisaki’s scream would certainly linger in our minds for sometime and we can not help but feel bad for him.

Seems like Boku no Hero Academia would again focus on the eccentric League of villains from the next episode and as Midoriya tells in the voice over, this was only the calm before something even more bigger happened.

It would also be interesting to see how Shigaraki and League of Villains will utilize the quirk erasing bullets which are in their possession.

Talking about the plot, Eri’s quirk certainly seemed like plot armor after it was revealed in the previous episode, as she would be able to undo any damage that will be done to one’s body. We were hoping she would be able to reverse the effects of the bullet and return Lemillion’s quirk.

However, the fact that Eri can’t control her powers and the gray areas regarding her quirk makes us eagerly wait for the coming episodes to see how it helps furthering the plot.

Coming towards the end, “Bright Future” leaves us with a heavy heart, as Nighteye perishes asking everyone to smile. He also tells a teary eyed Mirio Togata that he will become a finer hero than anyone else and that it was the only future that shouldn’t be changed.

We are sure many of you would reach out for tissues to wipe away those tears welling in your eyes.

My Hero Academia deserves credit for not letting the pace drop and proceeding the plot even is an episode after the major fights. It had done the same previously in Season 3 with “End of the Beginning, Beginning of the End.”

We are eager to see how the plot progresses from here, and guess what the next episode features Bakugou, so we are certainly looking forward to hear him shout “Shinneeeeee” at Deku.