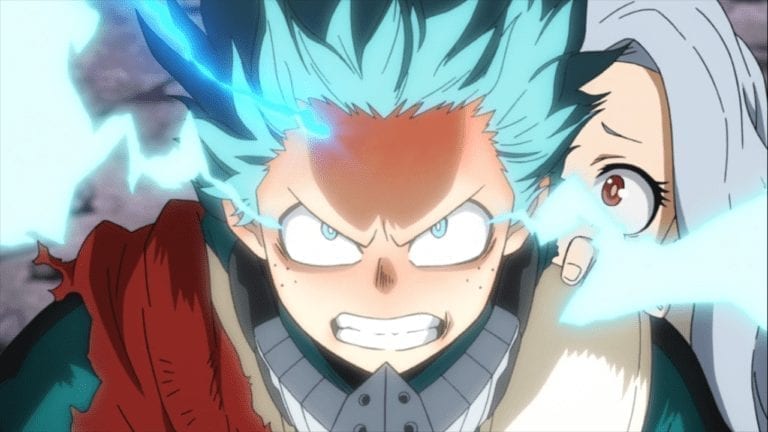 This review will contain possible spoilers for the latest episode (Infinite 100%) and the fourth season of My Hero Academia. If you haven’t watched the episode yet, you can stream it on Crunchyroll or Viz.

Mirio Togata had been the undisputed fan favorite till now in a blockbuster fourth season of My Hero Academia (Boku No Academia) managing to single handedly take down the members of Shie Hassaikai and almost beat Kai Chisaki (Overhaul) before heroically losing his quirk saving Eri.

However the latest episode, which many have already crowned as the best of the season managed to pack a powerful smash while also putting out some strong rousing emotional scenes.

The episode begins with a rewind of Uraraka, Froppy, Ryukyu and Nejire Hado taking on Rikiya Katsukame. The side characters teaming up and fighting a villain, whose quirk enables him suck other’s energy might not be the start everyone had in mind after the last episode. However, it is nice to watch them not getting ignored completely in favor of the main characters as they have their plus ultra moment.

Boku No Hero Academia has proceeded at a slow pace, taking time to build its characters and plots and at the same time giving believable power upgrades to the young heroes as they progress. Midoriya has only been able to use 20% of One For All’s power without damaging his body. However, as the title of the episode suggested he had decided to go all out in order to save little Eri breaking his body and possibly his future as a pro hero.

But then what we got was something totally unexpected.

Eri’s quirk which had until now been a mystery was revealed in the latest episode. Though she is not able to control it properly and it could have literally been a curse for the other superheroes, the newly revealed quirk of ‘rewind’ helps Midoriya to use One For All: Full Cowl at 100% without sustaining any damage to his body.

The resulting showdown between Deku and Overhaul was a more emotional one rather than plain shonen power and destruction brawl. As Deku protects Eri from Overhaul who is on the edge of losing it all, we get some of the most arousing and inspiring moments of the entire fourth season (definitely as cool as Lemillion saving Eri from the bullet with a smile).

“If I can’t protect the one girl in front of me then how can I become a hero who saves everyone?”

He also manages to pull of a move that was very similar to Saitama’s Consecutive Normal Punches defeating Overhaul and managing to change the future that Nighteye saw. P.S. Even after that serious fight, Overhaul’s mask was still not very damaged, some tough mask that is…

Does this mean that Nighteye’s vision of All MIght dying at the hands of a villain can be changed too? Well that seems to be a discussion for the future.

This episode was surely one of the better ones which we have seen during this season. Chisaki’s defeat though kind of quick, was satisfying. The fight surely won back the fans Deku might have lost to Mirio over the last few episodes. The League of Villains too continued to interfere, this time helping the U.A students and the pro heroes to defeat a formidable villain. They might be the ones going after Eri next after knowing about Chisaki’s plans.

While Mirio and Izuku finished this interesting arc on a high, it needs to be seen whether the next arc is able to meet the bar set by its predecessor.

Before we end, any guesses on where Aizawa Sensei could be? We didn’t catch a glimpse of him in this episode. Let’s hope wherever he stays safe wherever he is.