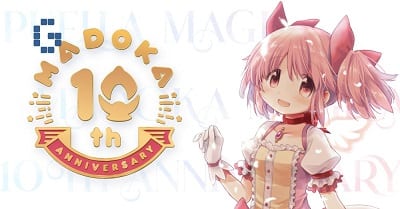 On Thursday, the 10th-anniversary project website of Puella Magi Madoka Magica was announced on its official Twitter account. The website is created to celebrate the release of the first airing of the anime in Japan on 7 January 2011.

The website features a special logo for the 10 year anniversary as well as a celebration illustration by the character designer Ume Aoki. Other illustrators and creators for the franchise have comments on the site expressing their gratitude and thanking the viewers for their continued support. Starting 14th January, more commemorative images as well as festive images will be uploaded by the illustrators and manga creators.

You can visit the 10th anniversary website through this link https://10th.madoka-magica.com/

Japanese anime series, Puella Magi Madoka Magica (MADOKA MAGICA) aired in 2011. The protagonist, Madoka Kaname and her friend, Sayaka Miki encounter Kyubey, a small cat-like creature. He offers to grant them any wish if they accept to obtain magical powers and fight against witches. Madoka is not able to decide if she should become a magical girl or not. The story shows her encounters with other Magical girls and the truth behind the creation of witches and their relation with magical girls, all of which will help her to decide what she should do.